Chinese companies in the US go on talent hunt 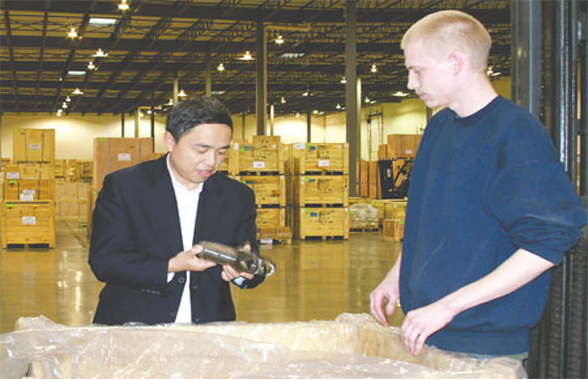 "Hiring local experienced talent is the only way for success in the US for a Chinese company," said Liang, who worked as an architect for eight years in various jobs before joining Xinyuan. "It's not only important, it is the only way."

Ryan Black joined Xinyuan as a development director two years ago after he worked for a European institutional investor. "Any American firms going to China think they can navigate the system without local help or any Chinese firms coming to the US without local knowledge base will be severely handicapped," Black said.

In talent acquisition, Chinese firms look more at the resume and education instead of the competence, the skills and even potential, Zhai said.

Zhai said this is still a mental disconnect between Chinese firms and multinational ones in hiring. "Most Chinese firms are still buying rather than investing in talent they hire," he explained, referring to a term he often uses to describe the situation - "milking the talent".

In this case, Wanxiang connects better to the US market partially because it only hires the person it believes is right for the company regardless of education and experience.

"Our recruiting process is pretty simple - we just want to make sure people we are hiring really can deliver; it doesn't matter what your title is on your current job, where you graduated, etc," said Ni.

He calls recruitment like "winning a lottery" because even with everything right on the person's resume it doesn't guarantee that he or she can deliver on the job.

"We are a very lean operation - everyone has a clear function and we need to get the job done," said Ni. "We don't need someone to tell us the strategy for tomorrow - it doesn't matter - you just need to do it."

The company has expanded its portfolio beyond the auto-parts business into clean energy and real estate over the years, said Ni. "We have been doing a bit here and there for a long in real estate, and three years ago we started putting a team together."

In the last three years, Wanxiang America has invested billions of dollars in real-estate projects across the US, Ni said. "In 2012 alone, we did about some 20 deals in California, Texas, Utah, Tennessee, and Chicago, in residential, commercial and retail projectswhatever allows us to make money," he said. "We provide capital and opportunity and work with the right partner to put the deal together."

When hiring for the real-estate unit, the company's situation is different from its early days when it was rarely known. Now job candidates line up through connections and recruiting firms. After meeting some 50 candidates for one open position, Ni made the decision. "Our mindset is we'd rather wait until the right person comes along," he explained. "We need the right person to provide efficiency and deliver."

Chris Dickerson, partner and vice-chair of restructuring practice group at DLA Piper, a New York-based law firm, said Chinese investors understand that in building a bridge between China and the US talent is important in their investments, and they realize finding the right talent is a challenge.

"I think this has always been a challenge and, while it will continue to be one, Chinese purchasers have clearly understood the need to have the 'right talent' and most deals these days involve 'Western' management and/or professionals," he said.

Zhai said the real challenge ahead for Chinese firms - even with money to hire top international executives - is to establish a healthy "eco-system" in terms of human-resource management.

Different corporate cultures and lengthy decision-making processes have made foreign senior executives working for Chinese firms feel they don't belong where they are, he said.

"What's the point of acquiring the business without realizing the synergy? The biggest challenge is to integrate the international executive into their system to make it sustainable," said Zhai.

"In the long run, if Chinese companies - even with enough capital - can't solve the talent and leadership issue, it will remain the single most challenging issue for Chinese firms investing abroad," he predicted.

When it comes to hiring and managing international executives, China's personal computer maker Lenovo sets a good example for its peers.

Since its purchase of IBM's PC division in 2005, the company has made big strides in the global PC market. Most recently it became world's No 1 PC supplier, ranked by both IDC and Gartner, reaching a 16.7 percent global PC market share in the second quarter of 2013.

Lenovo, which started in a concrete-block guard shack in Beijing, now has its co-headquarters is in Raleigh, North Carolina. Industry experts attribute much of Lenovo's success to its unique management team and the leadership of its chairman and CEO, Yang Yuanqing - known as "the Chinese boss with a global vision".

David Roman, Lenovo's chief marketing officer, is one of 10 members - representing seven nationalities - of Lenovo's executive committee. Overall, the global management team consists of 140 managers. Members of the committee, spread around the world, travel 50 percent to 70 percent of the time each month for meetings in Lenovo's various locations.

"Lenovo is a global company with Chinese roots; I do enjoy working here - it's a very unique company to work for," said Roman.

For Ni of Wanxiang America, one of his best hires was someone he hadn't sought. On a winter morning in 1995, a short while after Wanxiang America was established, Ni went to a Chinese restaurant near his office for a business meeting with an American banker, Gary Wetzel.

Ni showed Wetzel his 10-year business plan. Wetzel wasn't impressed or convinced. But the Chinese man's sincerity and persistence paid off. A few years later, Wetzel did something he had never thought of doing. He joined Wanxiang America. Today - nearly 20 years since that meeting in the restaurant - the American banker still serves as the chief operating officer for the company.

"It's really a culture that Pin brought us, and he has a unique way of sharing," said Wetzel. "The Chinese here set the pace and they are extremely hard working and that pace is very different from that of American companies."