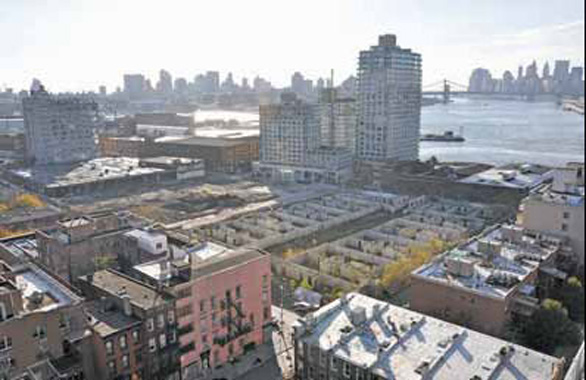 The recent acquisition by Beijing's Xinyuan Real Estate Co of a planned condominium site in New York City could be a watershed for Chinese-backed property development in the United States.

Xinyuan's $54.2 million purchase, announced Sept 28, of a parcel totaling 2 acres (0.85 hectares) in Brooklyn is unusual in size and scale for a residential-property transaction in the United States by a Chinese developer.

"The location is very popular with US domestic purchasers, and New York is a top destination for purchasers from China," Chairman and CEO Yong Zhang said in announcing the deal, which was completed by Xinyuan's US division, XIN Development Group International Inc.

It also appears to be the first residential deal in the United States by a US-listed public company from China. Xinyuan has been trading on the New York Stock Exchange, in the form of American depositary shares, since December 2007.

"I know about some companies looking around the US for proper land to purchase, but we are among the first to execute the move," Chief Financial Officer Tom Gurnee told China Daily.

"The story the media is missing is billions, if not tens of billions, that the Chinese government is investing in the US real estate market through a whole variety of proxies," Fasulo said. A key reason is the official Chinese policy to diversify its foreign assets from high levels of US Treasury bonds, he said.

While this will be Xinyuan's first start-to-finish housing development in the US, the 15-year-old company has been active on the residential market with other deals. During the recently ended third quarter, it also acquired 15 finished luxury condo units in Irvine, California, for $10 million. In the second quarter, Xinyuan closed on a $7.4 million purchase in foreclosure of 325 finished lots and 185 acres of undeveloped land at various sites near Reno, in northern Nevada.

Deals in the US and other countries are part of a strategy for Chinese investors - individuals and developers - to expand portfolios despite limitations in China on ownership of multiple properties in some cities, in order to keep housing affordable for residents.

Domestically, Xinyuan describes its focus as high growth in strategic "Tier 2" Chinese cities - those with highly developed urban areas and economic and population growth rates above the national average. It has built some 31 million square feet (2.9 million square meters) of housing in Chengdu, Hefei, Jinan, Kunshan, Suzhou, Xuzhou and Zhengzhou.

Xinyuan reported third-quarter net income of $31.9 million, or 44 cents per American depositary share, up from $31.2 million, or 42 cents per ADS, in the third quarter of 2011. Revenue was $226.1 million, a 6 percent increase from the same period a year earlier.

The company bought more than 1.15 million of its ADSs on the open market at a cost of $3.2 million, through a $20 million share-buyback program announced in this year's second quarter.

Amid current ownership restrictions in China, "the US will likely remain comparatively attractive in 2013 and draw more Chinese investment, from State firms, from private real estate developers, and from individuals," said Derek Scissors, a senior research fellow who specializes in Asia at the Heritage Foundation, a right-wing think tank in Washington.

"US real estate has been profitable since late 2009 and should remain profitable in 2013," he said.

Zhang, the CEO, said the project in the trendy Williamsburg neighborhood on Brooklyn's waterfront, "will offer a quality residential condominium development to more than 200 New York families, as well as allow us to capture a large demand from China for quality residential product in the United States".

The site is considered "shovel-ready", having had $8 million invested for permits and other clearances by its previous owner, from whom New York real estate investor Richard Kalikow took over the property through foreclosure earlier this year.

The below-market price set by Kalikow was attractive to Xinyuan, which had been seeking land in New York City on which to build condominiums, according to Omer Ozden, who advised the Chinese company on the deal.

Xinyuan said it plans, after some design modifications, to begin construction on the site during the first half of 2013. It hopes to capitalize on high demand for condo residences in Brooklyn, said Ozden, who is also the managing partner of Beijing Capital Investment Co.

"It's a real bargain," he said. "We selected this lot for its attractive price, approval of development, proximity to Manhattan, potential to grow and clear title."

The parcel will yield 216 condo units with net salable floor space of about 400,000 square feet (37,161 square meters). Most of the units will be approximately 1,900 square feet (177 square meters), which is fairly large by New York standards, said Gurnee, Xinyuan's financial chief.

Xinyuan expects to have a mix of local and Chinese buyers for its Brooklyn condo project,

"We target all kinds of buyers, but we expect 40 percent of sales to go to Chinese buyers and 60 percent to New York residents" including those who might have been priced out of the costlier Manhattan market, Ozden said.

The site in the most populous of New York's five boroughs is close to the East River and the Williamsburg Bridge, and offers views of downtown Manhattan. It's expected to be part of the next phase of "gentrification", or redevelopment designed to attract higher-income residents, that parts of Brooklyn have been undergoing since the mid-1990s.

But while prices and sales activity have been stable in the three years since the height of the crisis that hit New York's financial-services industry hard, demand has been rising, local developers say.

While market conditions are favorable, particular challenges are bound to await any foreign investor, such as adapting to local laws and business practices, Fasulo said. For companies like Xinyuan, having a US office to handle deals can be helpful, but doesn't guarantee success.

"Xinyuan does not have any competitive advantage over other developers," Fasulo said. "It is complex to build a building anywhere, and it's more complex to have your headquarters 10,000 miles away."

Scissors, of the Heritage Foundation, said: "My advice is to invest here if one is interested in multiple purchases. There are quite a large number of legal documents which can be bewildering in the first purchase but the process will become much easier to understand after that."

Previous
Back to top