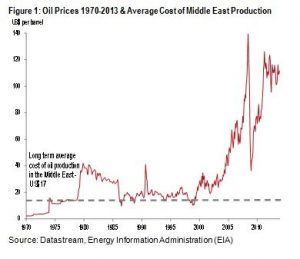 While recent news feeds are full of headlines about emerging market capital from Asia, Latin America and Africa coming to take over the commercial property world, Middle Eastern capital has consistently and reliably been acquiring commercial property over the last 30 years. The source of the Middle Eastern investor’s wealth is well known, with the region remaining the world’s largest exporter of hydrocarbons. Although new forms of energy production are now coming on stream at a gradual rate, the global demand for oil is forecast to increase by 25% to 2020 (EIA estimates). With costs of production well below current oil prices the revenue streams of the nations which make up the Gulf Cooperation Council, the GCC, (Saudi Arabia, Kuwait, Bahrain, Qatar, the United Arab Emirates and Oman) look to be relatively secure for the short to medium term. Although there is no lull in their appetite for real estate, the way Middle Eastern groups invest in real estate is changing.

KPMG, in one of their reports earlier has said that diversification remains a key and common objective for Middle Eastern SWFs as countries in the region seek to reduce their reliance on energy, oil and gas prices.

SWF’s are big and getting bigger 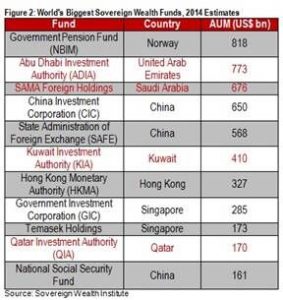 Many years of consistent income from the production of hydrocarbons has enabled the gulf countries to create Sovereign Wealth Funds (SWF’s) to manage their budgetary surpluses for the benefit of future generations. Kuwait was the first country to form such a fund in 1953, the Kuwait Investment Authority. These funds have grown considerably since that time, with four of the largest SWF’s in the world based in the GCC . The majority of other large SWF’s are located in Asia, with many of these investing in direct commercial property for the first time. They have quite a way to go to catch up with the Middle Eastern funds who have been allocating between 5-10% of their assets under management to direct real estate for many years. SAMA is a notable exception with the majority of their investments in short term instruments. With budgetary surpluses continuing, the size of the SWF’s continue to grow and it is conceivable that the Abu Dhabi Investment Authority (ADIA) could pass the US$1 trillion mark in the next few years, implying over US$100 billion would be invested in direct real estate if they maintain their 10% allocation. 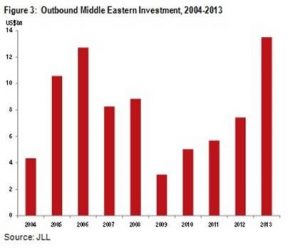 While the outflow of capital has been consistent the global financial crisis did trim the buying activity of Middle Eastern investors. With the majority of developed markets dipping into a severe depression, the gulf states didn’t escape unharmed with the United Arab Emirates and Kuwait seeing their economies contract significantly in 2009 (by -4.8% and -7.1% respectively). The result was that more capital was needed within the region to support the domestic economies, thus sacrificing global opportunities. However, investors from the region were some of the first back into the market in 2010 with large deals in London, New York and Paris as attractive buying opportunities presented themselves. 2013 has seen a surge in outflows from the region, triggered by renewed political turmoil, surpassing the previous peak JLL recorded back in 2006. 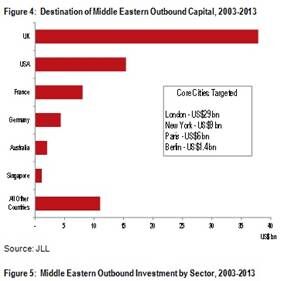 London has remained the favoured destination for Middle Eastern capital. The historic links between the UK and the gulf has long encouraged the two way movement of people. Many Middle Eastern investors have been educated in the UK while the gulf has been a favourite destination of British expats for many years, and this has certainly encouraged the flow of money. Within London it has been the super prime districts of Knightsbridge, Kensington, Mayfair and the City that have attracted the most attention. A focus on the major cities of the world has also seen investment in New York, Paris and Berlin over the last 10 years. The safe and secure nature of these big cities has been a key driver of investment decisions. Coming from a volatile region, investors have traditionally been focused on capital preservation and some element of anonymity, although this is now changing somewhat as real estate markets become more transparent and the number of potential investment locations increase. They also selectively invest in other geographies driven by higher return factors.

Hotels have disproportionate appeal
In contrast to many other cross-border investors the Middle Eastern groups have purchased a greater proportion of hotels. Investment into the hospitality sector typically makes up between 5-10% of a mixed portfolio, but for major Middle Eastern SWF’s (since some groups are Sharia Compliant) a quarter of all their activity has been into hotels. The emphasis on hotels reflects the focus on the core cities of the world and the desire to own large, secure, resilient assets. Another unique characteristic of Middle Eastern groups is that they are very reluctant sellers; they have the smallest proportion of disinvestment of any nationality included in JLL’s global capital flows database. This approach may however now be changing, with an element of capital recycling starting to appear in some funds investment strategies. 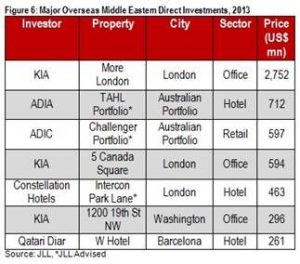 As the global property market has become more sophisticated, Middle Eastern SWF’s have adopted an increasingly rigorous and analytical approach to investing. While they are more than capable of undertaking very large single deals (Figure 6), a key component of their move into new and more emerging markets has been a willingness to form joint ventures and partnerships with local developers and investors in countries such as Australia, Singapore, the United Kingdom and China. The choice of these partners reflects the different investment philosophies of the various funds QIA, KIA and SGRF of Oman remain very core investors while ADIA, OIF, Aabar and ADIC are more opportunistic which has seen them move into new geographies while also employing indirect and debt investment strategies. We expect this trend to continue as the competition for assets globally becomes more intense and the need for good local intelligence becomes more important.

The Middle East remains a politically volatile region and the recent Arab Spring uprisings have proved to be another trigger for the outflow of capital. The on-going political tensions have encouraged new groups and families who are already heavily invested in the gulf to come together and consider international investment in a more coordinated and disciplined manner, with this trend particularly noticeable in Saudi Arabia. These new overseas investors are more interested in longer term investment returns and wealth preservation rather than the assembly of a trophy asset portfolio. This more return orientated approach has seen groups from the Middle East invest in higher yielding opportunities within the industrial and logistics sectors as well as taking on development and refurbishment opportunities in the residential sector in the United Kingdom and the United States.

Improving domestic economies will generate more cash for investment
With most of the world’s major economies looking to grow in harmony in 2014 this should be a positive for the Middle East region. Improved domestic economic conditions could however also create increased competition for capital. Over the next 10 years the region will be home to some large events including the EXPO 2020 in Dubai and the World Cup in Qatar in 2022. In addition Saudi Arabia is embarking on several major infrastructure projects across the education, transport and healthcare sectors which will boost domestic demand.

This combination of improving domestic economies and the consistent demand for oil and gas will provide Middle Eastern funds and individuals with increasing amounts of capital with which to invest in commercial property globally.

With commercial real estate markets continuing to grow and their transparency and sophistication improving year on year the number of options available to capital rich investors continues to increase. While we expect their focus to remain on the core markets of Europe and the United States, key cities in emerging markets are offering a greater number of opportunities for investment. In these locations we expect to see Middle Eastern investors combining with other sources of capital to access portfolios and very large single asset deals.