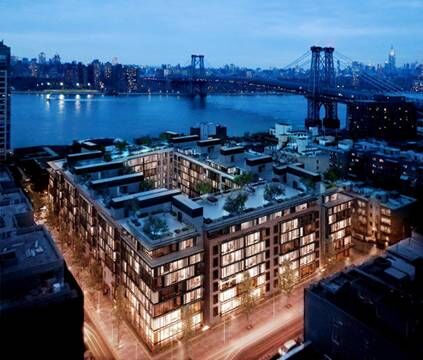 RKO Keith’s Theater, a landmark movie palace that once was the focal point of the Flushing neighborhood in Queens, New York, was sold to a Beijing-based developer that plans to tear most of it down and build a 269-unit condominium tower.

Xinyuan Real Estate Co., which entered the New York market in late 2012 and has almost 600 condo units planned or under construction in the area, bought the 1928 theater from JK Equities LLC for $66 million. JK had purchased the property three years ago for about $30 million and took it through a permitting process that included the preservation of its landmark-designated lobby and grand foyer. The theater’s been closed since the mid-1980s.

Though the theater has been worn by decades of storm damage and is hidden behind plywood, its lobby retains the deep brown woods of the Mexican baroque style architect Thomas Lamb favored. While the seats and the stage have long since been stripped away, the restored lobby may be a selling point for condos, which are likely to be sold to Asians and Asian Americans who have made Flushing a densely populated destination, almost a city unto itself within New York City.

“We’ve been waiting for the right time to pounce in this area,” said Omer Ozden, chief executive officer of RockTree Capital, which represents Chinese real estate firms including Xinyuan. “The macro drives for the typical buyer here are a little bit different -- a lot of all-cash buyers, mainland Chinese that have a lot of liquidity. And, frankly, just on the higher end, there’s a huge amount of demand and not sufficient supply. We see a major uptick in pricing and demand.”

Xinyuan, led by Chief Executive Officer Yong Zhang and a major residential builder in China, was the first company from the country to break into the New York condo-development market, with the Oosten, in Brooklyn's south Williamsburg. Xinyuan bought the project for $54.2 million in 2012, and the 216 unit project is almost complete and about 75 percent sold, Ozden said. Other Chinese companies to follow Xinyuan into New York include Anbang Insurance Group Co., which bought Manhattan’s Waldorf Astoria last year for $1.95 billion, a record price for a U.S. hotel, and plans to convert most of its 1,400-plus rooms to luxury condos.

In January, Xinyuan bought its second New York condo development, in Manhattan’s Hell’s Kitchen, where it’s planning about 100 units. With the Manhattan condo market looking “a little bit risky” because of an oversupply of newly built luxury units, Xinyuan’s interest in Flushing reflects a belief that the area, with its unique attraction to well-financed Asian buyers, will be “counter-cyclical,” Ozden said.

“There’s a lot of capital out there looking for development, and the outer boroughs are a more logical place to focus on,” said Jonathan Miller, president of appraiser Miller Samuel Inc. Building condos in traditional Manhattan neighborhoods “has fallen out of favor.” Ozden declined to say how much Xinyuan will pay to build the planned 16-story, 195-foot (59-meter) tower. The company is working on coming up with a precise cost to communicate to its shareholders, he said.

Demand from Chinese buyers has propelled large residential projects in Flushing. Canadian private equity firm Onex Corp. is planning 750 condos in three towers at its Grand at Sky View Parc project. When sales started at the first building in January 2015, half of the apartments went into LIVE TVcontract within six hours on a single day. Ninety-five percent of the buyers were Chinese, the developer said last year.

In November, the opening weekend of sales for the second tower yielded $85 million worth of contracts, Onex said at the time. All units at the first tower have been purchased, and the second is 75 percent sold.

Flushing began to draw Asians in the early to mid-1980s, as the Irish and Jews who dominated the neighborhood -- and largely made up the RKO theater’s clientele -- began to die out, said Robert Freedman, co-chairman of brokerage Colliers International, who has managed prominent real estate sales in the neighborhood. Today Flushing draws Chinese, Koreans and Vietnamese not only as residents, but also as a place to shop, dine and visit doctors and dentists.

RKO Keith’s Theater sits across Northern Boulevard from the end of congested Main Street, and the condo project could draw development across the boulevard into Flushing’s underused northern end, said Michael Cheng, a developer and a member of the local community board.

The development will include ground-floor retail adjacent to the lobby as well as, possibly, medical offices. Its basement garage will have 305 parking spaces, more than one per condo, which could boost prices for the units and limit additional stress on the already-crowded subway station nearby.

The RKO theater was originally a vaudeville venue that featured performances from Mae West, the Marx Brothers and Jack Benny. It still has remnants of its blue vaulted ceiling, where electric stars twinkled and “a special machine projected ‘clouds’ moving across,” giving the “illusion that the audience was sitting outside in a Spanish town on a warm evening,” according to a 1984 report by the city Landmarks Preservation Commission. The auditorium will be demolished to make way for the condos.

The theater still holds sentimental value for Jonathan Karlik, a JK Equities executive and son of principal Jerry Karlik. His parents went on dates there as teenagers when it was still a movie palace.

“They came here all the time,” he said. “The RKO Keith’s Theater was a popular destination hangout for kids during that time. It was ‘Let’s meet at the RKO’ at a time when there were no iPhones or BlackBerrys or Facebook.”