A 7.43% Yield In Healthcare That You Have Probably Not Heard Of

It is still cheaper than its closest peers in spite of better payout ratios and lower debt to gross book value.

The big boost to NAV, along with 4% plus NOI growth, should help this REIT to start trading at a premium to NAV.

We estimate a 35-40% return in one year, including dividends.

Northwest Healthcare Properties is a pure play medical office and hospital landlord trading primarily on the TSX (NWH.UN) and also cross-trades on the OTC market (OTC:NWHUF). It provides investors with access to a portfolio of high-quality healthcare real estate comprising of 142 properties (as of Q1 2017) in Canada, Brazil, Germany, Australia, and New Zealand.

Over the last few years, the criticism it faced was its payout ratio was too high and REIT was too leveraged. Just when things started to look good again, Brazil, one its big exposures, took a hit in 2015-2016. However, now finally, all of Northwest's markets are firing together. Northwest's growth has taken care of both the payout ratio and the leverage issue, and it is now primed for a pristine valuation.

All amounts are expressed in Canadian dollars unless specified otherwise. All information sourced on Northwest Healthcare Properties were sourced from its Q1 2017 presentation and Q1 2017 Financial Statements. 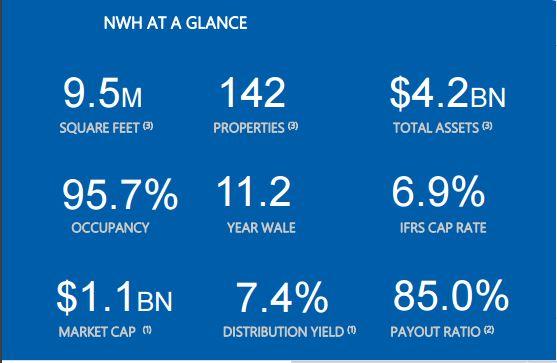 The first thing that stands out when you look at the regional components is the complete absence of US holdings.

That can be a good or a bad thing based on your perspective. It is certainly an excellent diversifier. I personally like the idea of broad diversification, and exposure to four developed markets in a single REIT is a strong positive for me. Owning prime real estate globally in many major cities adds to the appeal of Northwest. Additionally, I think it is one of the safest ways of getting exposure to Brazil. 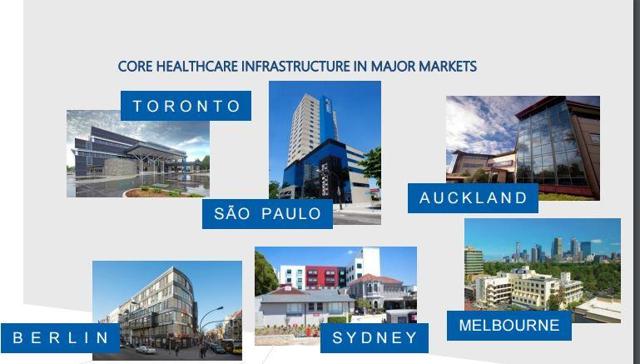 Northwest boasts an excellent occupancy rate of almost 96%. It has maintained a high occupancy rate since inception along with a very high Weighted Average Lease Term/Expiry (WALT/WALE). 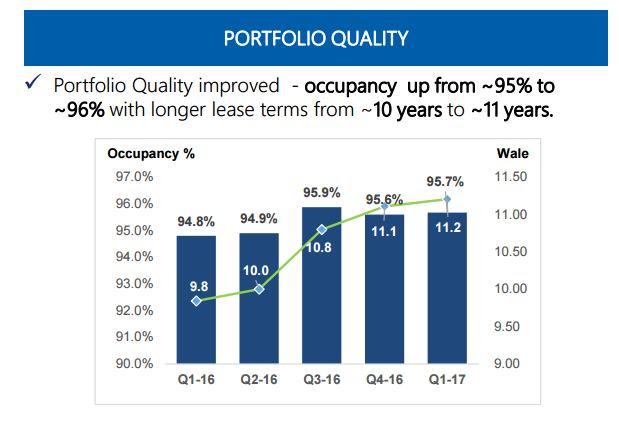 While the lease term is incredibly long, it still offers investors an opportunity for growth with leases being indexed to inflation or being raised by fixed amounts over the course of the lease. 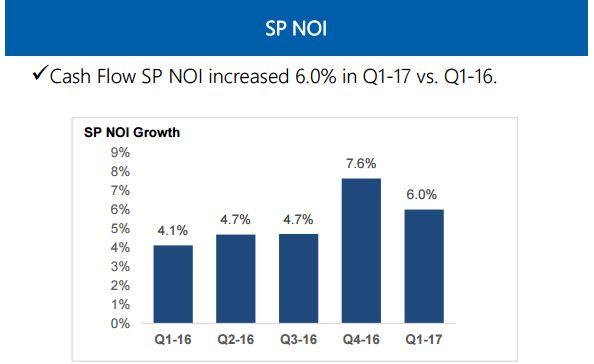 Diversification is very high even at the tenant level with a couple of exceptions right at the top of the list. 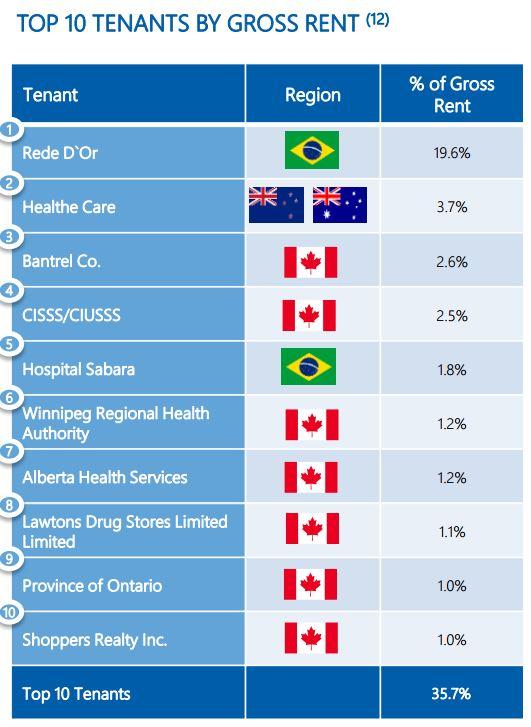 Rede D'Or accounts for the bulk of Brazil exposure. That is mitigated partially by the fact that it is a very high credit worthy tenant (AA+), and Northwest is getting paid a very high CAP rate on its investment. This can also be the source of future Net Asset Value (NAV) growth as improving prospects in Brazil can cause a very significant CAP rate compression. 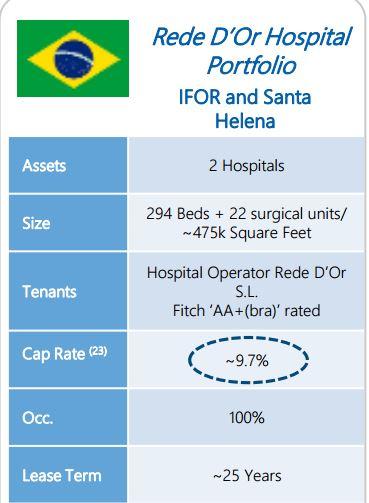 Northwest currently pays a well covered $0.80 annual dividend. The dividend payout was quite high to begin with, but Northwest has grown into it, and now, the payout ratio is sub-90%. 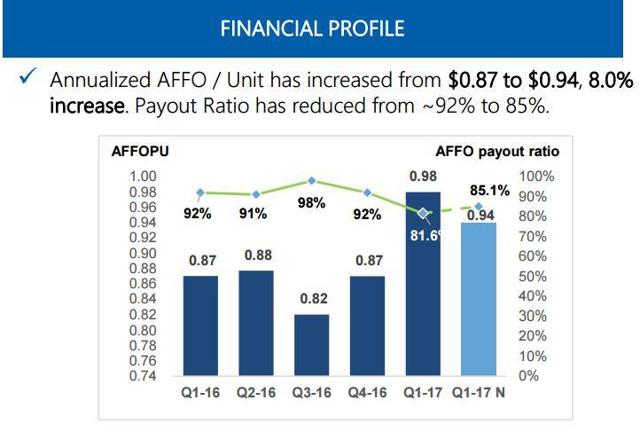 Capital Structure and Alignment of interests:

Leverage has also been steadily declining and is now in a sub-50% range. It has managed to do this while growing rapidly and keeping the WALT incredibly high.

Additionally, if an aligned management team excites you, you are going to love Northwest Healthcare Properties.

Largest unitholder? Well, how large? Paul Dalla Lana holds in excess of one quarter of the outstanding units.

Unlike US REITs, Canadian REITs follow IFRS and estimate their NAVs quarterly based on fair market values. Northwest estimated its NAV to be $12.55 at Q1 2017. At the current price of $10.75 ($7.97 USD on OTC exchange), the units are trading at about 14% below the fair value. Based on adjusted funds from operations, Northwest is trading at about 11X 2017 AFFO.

This is a big discount to some of the better known REITs on the TSX. While there is no direct exact peer, the closest would be Dream Global REIT (OTC:DUNDF) which trades at a forward multiple 13.3X AFFO and is still paying out in excess of 100% of AFFO as dividends. Additionally, the weighted average lease term is under five years for Dream Global compared to 11 years for Northwest Healthcare. The market should be giving a premium for that stability instead it is being discounted.

Considering the excellent NOI growth, diversification, WALT, and insider ownership, I think this is a prime candidate to trade over NAV in the coming year. The NAV itself should be moving higher as the income from the properties keeps increasing. If debt remains constant and same-property NOI increases by another 4% that will push up the NAV by about 7% due to the leverage. In a year's time, the NAV should be pushing $13.50, and Northwest should trade at a small premium to that. That would imply an almost 40% return from here, including dividends.

The biggest risk is the currency risk as the REIT does not actively hedge its currency exposure but does have some natural hedges in place. Additionally, US buyers have one more layer of currency exposure (USD/CAD) exchange rate which will influence dividend payouts and unit values.

Northwest Healthcare Properties trades OTC in the US where the volumes are quite low. If possible, it might be best to buy this directly on the TSX where it trades over 125,000 units a day. If trading on the OTC market, please take into account the current price of the NWH.UN on TSX along with the current exchange rate while placing your order. Always use limit orders. Dividends are subject to 15% withholding taxes for US residents unless shares are held in an IRA. This is for general information only and should not be construed as tax advice.

I wrote this article myself, and it expresses my own opinions. I am not receiving compensation for it (other than from Seeking Alpha). I have no business relationship with any company whose stock is mentioned in this article.

Editor's Note: This article discusses one or more securities that do not trade on a major U.S. exchange. Please be aware of the risks associated with these stocks.